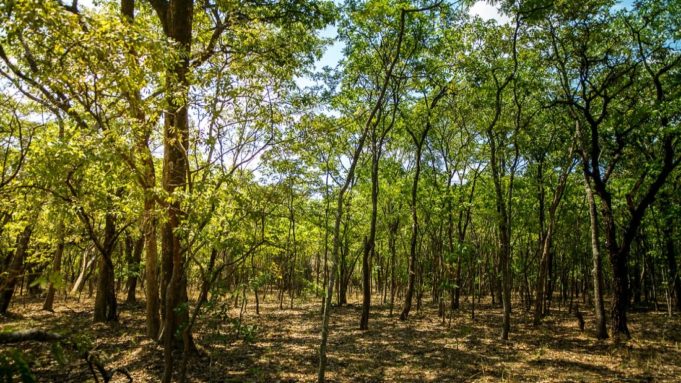 Globally, 1.6 billion people rely on forests for their livelihoods, and many of them are among the world’s poorest.

Forests are also one of the most important solutions to addressing the effects of climate change. Approximately 2.6 billion tonnes of carbon dioxide, one-third of emissions from burning fossil fuels, are absorbed by forests every year.

Forests play an integral role not only in supporting the carbon cycle but supplying goods and services that can drive sustainable growth. Commercial trade in timber and non-timber forest products is a billion-dollar industry.

Regardless of the endless benefits forests offer to humanity, forests have sadly come under threat with the rate of deforestation globally estimated at 10 million hectares per year between 2015 and 2020.

Zambia today has the fifth-highest rate of deforestation globally and takes the number one spot in Africa. Losing forests at these rates means losing the whole range of health and economic benefits we derive from healthy forests for good.

Thanks to COVID-19, the year 2020 brought about the grave realisation that nature is the backbone of our health as individuals and as a society. Nature provides the essentials needed to live, work, and be in good health. It’s our first line of defence when our health is threatened.

As COVID-19 took its toll, a range of natural medicines and foods from nature were recommended to help address symptoms of the deadly flu. For some rural communities, forests are the only pharmacy available and are an important source of livelihoods.

So why are we losing forests so fast?

In a 2021 report by the World Wide Fund for Nature (WWF), agriculture has been cited as the leading cause of deforestation globally.

A growing global population and increased food consumption have led to the conversion of many forests into farms.

The WWF report further states that deforestation is also driven by logging, human migration and population increases, extractive industries such as mining, oil and gas, transport and infrastructure projects and expanding towns and cities. The exact causes of deforestation change over time and vary from region to region. These regional differences highlight the need for place-based solutions that take specific local contexts into account.

In Zambia, horizontal expansion of the various forms of agriculture (ie, shifting cultivation and commercial farming) and infrastructure development together remain by far the most critical direct factors leading to heavy deforestation and forest degradation.

The country undertook a land cover mapping exercise on land cover changes to address national interest issues, mainly to generate information on deforestation and forest degradation. Based on this land cover mapping using satellite imagery data from 1990, 2000, and 2005, the rate of deforestation in Zambia is estimated at 284,000 hectares per annum or 0.62 per cent of the country’s current forest land.

Considering the population density and resource accessibility, Zambia is losing between 250,000 and 300,000 hectares of forest cover per year.

Much is known about the drivers of deforestation, including agriculture, plantations, development, and extractive activities. However, the shifting influence of these drivers over time is less well understood. These drivers tend to change depending on the global market and investment trends, national political shifts, and local political economies.

A common threat is the steady development of roads associated with mining and logging, which is often followed by commercial agriculture.

Conversion to agriculture is also linked to changing climatological and topographic conditions, market logistics and land speculation that persist in frontier areas.

Deforestation can also be influenced by several other factors, including local behaviours, values and beliefs, power relations, and governance. They are also affected by a range of social and policy responses. Stopping the rapid loss of benefits from forests is thus imperative for everyone.

To maximise the climate benefits of forests, we must keep more forest landscapes intact, monitor what’s used and manage them more sustainably.

According to the UN, halting the loss and degradation of natural systems and promoting their restoration have the potential to contribute over one-third of the total climate change mitigation by 2030.

Restoring 350 million hectares of degraded land in line with the Bonn Challenge could sequester up to 1.7 gigatonnes of carbon dioxide equivalent annually.

Among other goals, WWF Zambia is calling for an end to the loss of natural spaces like forests, prioritisation of large roads over urban trees and to put in place measures that will halve the unsustainable production and consumption patterns that negative impacts.

The consequences of Lusaka cutting down trees and building houses and hotels over groundwater recharge points formerly protected by forests will make this and future generations pay heavily through increased water shortages and insecurities.

To address the scale of the problem, focus on tree planting only in Zambia will not help stop and reverse the accelerated rates of forest loss. So we need a new deal in Zambia for forests and people.

One that focuses on forest restoration as one of the sure pillars to put nature and livelihoods on a truly sustainable recovery path by 2030. Setting up the nation the path to achieving real sustainable development, and a carbon-neutral, nature positive, equitable society.

WWF Zambia is calling on the government to prioritise implementation of its forest restoration commitments as part of its Afr100 (#AFR100 https://afr100.org/) and Bonn Challenge (https://www.bonnchallenge.org/) commitments