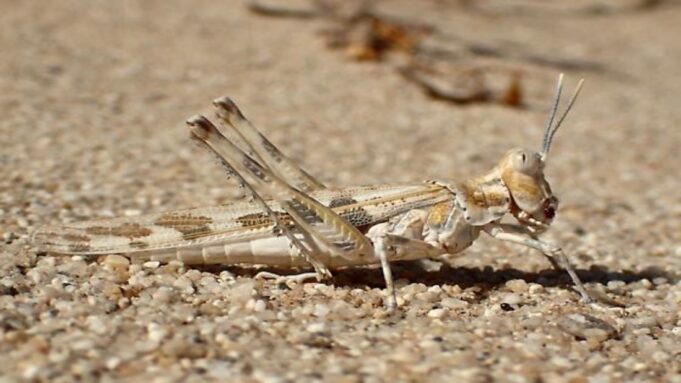 The Brown Locust outbreaks in Southern Africa have not made the same headlines as the desert locust outbreaks in the Horn of Africa and the Arabian Peninsula. However, the pest continues to pose a serious threat in parts of southern Namibia. The fourth and most severe wave of Brown Locusts has hit the country.

According to Namibia’s Ministry of Agriculture, Water and Land Reform (MAWLR), Brown Locusts have infested 1.2 million hectares of cultivated fields in the Karas region alone, with the infestation already spreading to the Hardap region to the north. Both regions are still recovering from a six-year drought that ended in 2019, and the locust outbreak is wreaking havoc on livelihoods and agricultural production.

Karas and Hardap regions’ main source of livelihood is livestock farming, with about 70-80 per cent of inhabitants raising small stock such as goats and sheep for their own consumption and income.

Johannes Muhenje – a farmer from Aus – says he has never witnessed such large swarms of locusts in the 30 years that he has lived and reared animals in the Karas region.

“The locusts have started feasting on the grass and trees near our cattle outposts and very soon if they are not brought under control nothing will be left for our livestock,” Johannes said expressing uncertainty about the future.

Eddy Kooper, a small-scale farmer in Constansia 2, a livestock outpost, expressed fear of what lies ahead if the locusts are not controlled.

“It’s a dire situation, we hope that the government can bring it under control and salvage the remaining grass so that our livestock do not starve during the winter period,” he said.

Brown Locust masses on roads have also made roads in the region very slippery and dangerous. Locust related accidents have become frequent and several people have lost their lives in these accidents.

To avert a crisis, the Food and Agriculture Organization of the United Nations (FAO) has been at the forefront of supporting the Namibian Government through MAWLR in its monitoring and surveillance activities to boost the Ministry’s locust control efforts on the ground. This current support builds on prior support targeting similar outbreaks of African Migratory Locust and Red Locust in the northern part of the country.

With funding from the USAID’s Bureau for Humanitarian Assistance (BHA), FAO through the project “African Migratory Locust Response to Mitigate Impacts on Food Security and Livelihoods” is servicing 22 vehicles carrying out monitoring and control efforts. This support enables personnel on the ground to survey large tracts of land infested by locusts and to carry out locust control interventions.

Recently, FAO through partial funding from USAID-BHA donated 56 smartphones and 40 tablets to MAWLR to enable the Ministry to intensify surveillance, monitoring and the timely reporting and sharing of information on the locust outbreak.

So far, the Ministry has managed to survey 2.119 million hectares across the country.

“Surveillance and control can be a challenge in such a large region such as Karas but we are trying our very best each day,” said Llewellyn Muenjo, MAWLR’s Chief Agricultural Technician in Karas, who is leading a surveillance and control team on the ground. “We are hopeful that with strong stakeholder collaboration, such as that with FAO, we can overcome this threat and be able to avert a full-blown disaster,” he added.

Additionally, FAO has facilitated the training of 348 farmers and 158 technical staff on the eLocust3m mobile phone application for surveillance, monitoring and mapping across all 14 regions in Namibia.

In February 2020 the first wave of the African Migratory Locust (AML) was reported in the north-eastern in the Zambezi and Kavango East and West regions.

This was followed by a second wave which was reported in August 2020, and covering the north-eastern as well as north-central regions of Kunene, Ohangwena, Oshana, Omusati and Oshikoto.

In March 2021, a third wave was reported and this comprised of AML and Red Locust – to a lesser extent – in the aforementioned areas, and Brown Locust in the southern parts.