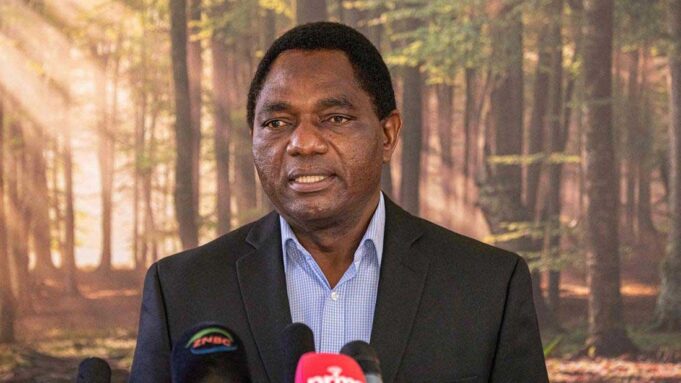 Chinese enterprises participating in Zambia’s biggest agricultural and commercial show on Monday expressed happiness at the level of response gotten from customers that visited their exhibition stands.

The Chinese Embassy in Zambia has managed to organize 110 enterprises at the 94th Agricultural and Commercial Show, resulting in organizers recognizing China as a “country of honor” because of the unprecedented number of Chinese firms at the show.

“This is the first time that we are participating in this show and so far we are happy with the response we have gotten. Some people who visited our stand have already started calling us for our services even before the show ends,” Leonard Phiri, a supervisor at Sunagri Investment, a Chinese firm that hires drone technology used for spraying in fields, said.

He expressed confidence that the company will see an increased demand for its services after participating in the show because the technology was currently not widely known in Zambia.

Established five years ago, the Chinese firm, which also provides tractors that use real-time kinetics (RTK) used by tractors when preparing agricultural land, is happy that Zambia was the first country in Africa that was using its technology.

Phiri said the company has also opened a branch in Uganda where its smart agricultural technology was being used.

Violet Mhango, the administrative assistant at China CAMC Engineering Company Limited, a subsidiary of Sinomach, said the company was happy with the enthusiasm shown by customers at the show who have been frequenting the exhibition stand.

She said the company, whose main focus was in construction engineering, decided to exhibit at the show because it was diversifying into the agricultural sector as well.

She said the company has diversified into trading and was looking at exporting beef to China.

“There is a huge market for beef in China but we don’t have suppliers of beef so we came here because we wanted to link to beef suppliers,” she said.

Davison Mwanza, a supervisor at Herocean Zambia Limited, a company involved in the transportation business, said participating in the show has resulted in the company connecting to more customers.

“We are happy that a number of customers came through and contacted us for business and we are hopeful that our business here will not be the same after participating in the show,” he said.

Simon Sakala, the Vice-Principal at CAMCO College, established by CAMCO Group of Companies to provide local people with skills on how to operate, repair and maintain agricultural equipment, expressed optimism that participating in the show will result in an increased number of students.

He said the Chinese firm decided to establish the college last year after noticing that most companies it supplied agricultural equipment to had difficulties in operating and maintaining the equipment.

According to him, over 200 local people have been trained since the college opened, adding that the people have now been equipped with skills on how to operate various agricultural equipment.

“We are just responding to the government’s call for skills training in the country and the idea behind opening this college is to fill the gap,” he said.

The 94th show, which is being held under the theme “Innovation through Technology, Technology Transforms Business” runs from July 27 to Aug. 1 and bounced back after two years of not being held due to the COVID-19 pandemic.

In remarks delivered during the official opening ceremony on Sunday, President Hakainde Hichilema underscored the importance of technology in doing business.

He said technology was vital to overcoming challenges brought by COVID-19 and climate change, among others.