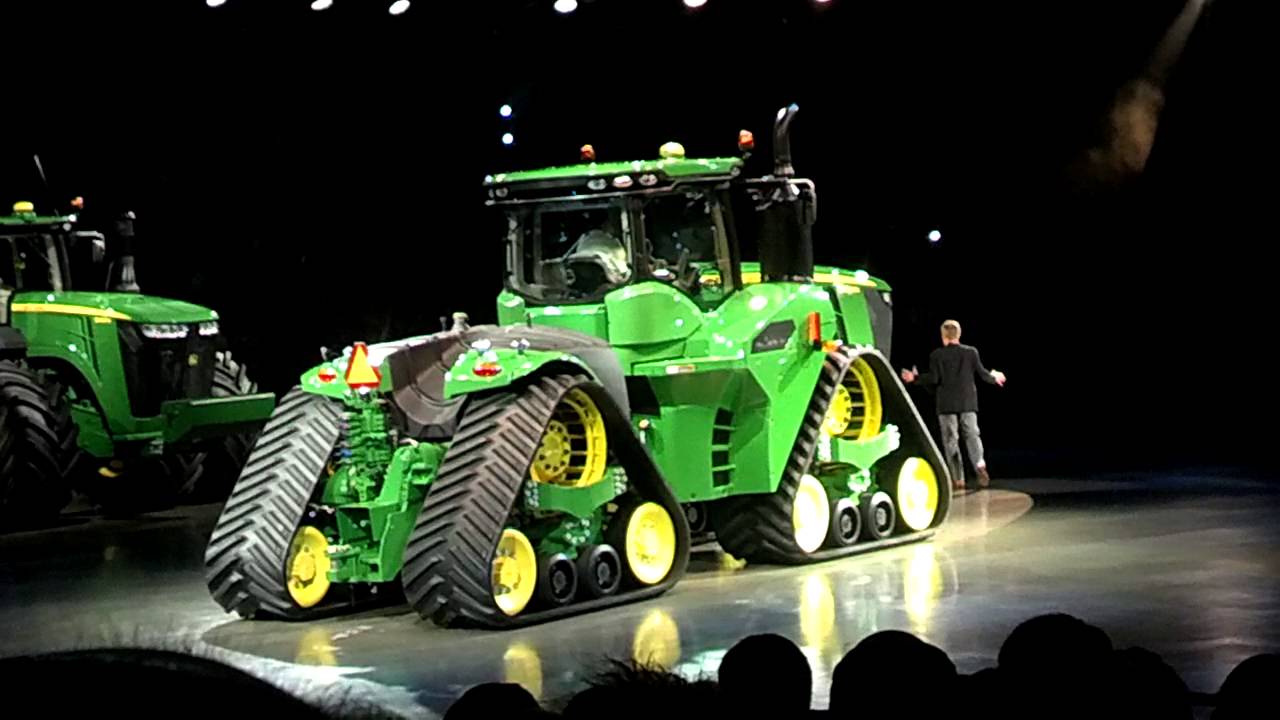 To keep up engine response and maximise torque curves, the Deere motor uses series turbos, one of which is a variable geometry turbo (VGT). The Cummins engine has a similar approach, but just makes do with a VGT. Other benefits of VGTs include increased low rpm torque, quicker response to load, increased peak torque and improved fuel economy, says Deere.

TRANSMISSION
Like its 9R/9RT siblings, the four-track tractors are available with the firm’s e18, full powershift transmission.
The transmission can be controlled in one of three modes; manual, custom or automatic. In the latter two modes the tractor’s Efficiency Manager system allows automatic control of the engine and transmission. This essentially lets the operator select a target speed, leaving the tractor to work out the optimum engine revs and gear ratio based on loads exerted on the powertrain.

TRACK UNITS
Unlike the firm’s twin track machines, drive to the tracks is positive using lugs on the inside of the belts and a large diameter drive sprocket.
Interestingly, the track units use one less set of mid-rollers compared to a certain red coloured competitor’s machine. Deere says this reduces vertical shock loadings up through the drive axle, which occurs when a mid-roller is positioned directly in-line with a drive axle.

Via two parallel hydraulic systems (one optional), the spools can be split into two banks offering a bank of high flow, low pressure spools and a bank of low pressure, high flow spools.
A 9,072kg rear linkage can also be specified, as can a 1,000rpm pto.

CAB
All 9RX tractors are equipped with a cab suspension system, which is fully automatic and requires no operator adjustmen.

Similar to Deere’s other large tractors, the CommandView 3 cab on the 9RX features the same layout and operating logic, along with a 40 degree swiveling seat and leather seat option.

Via the Generation 4 touch screen CommandCenter, all major tractor functions can be set-up, along with access to guidance systems and job documentation.