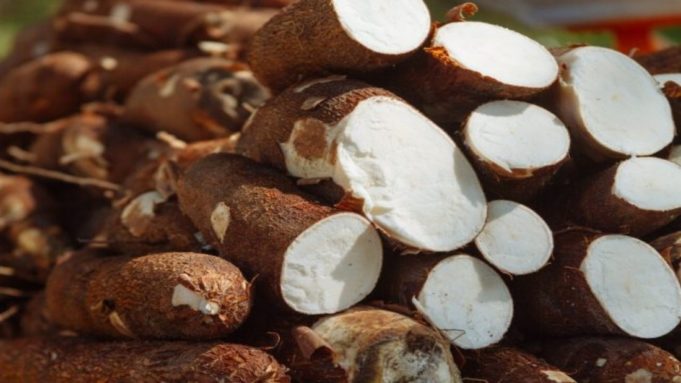 Veteran Seventh-Day Adventist Evangelist Mpundu Mweshi described how Zambians from Luapula Province were mocked at boarding schools and colleges over their staple food in one of his gripping sermons.

Cassava had a reputation for being inferior to maize and having little nutritional value until about five years ago.

“They used to laugh at us people from Luapula, that we should go and remove cassava flour dust from our eyelashes,” Pastor Mweshi explained with his trademark sense of humour.

But cassava is no longer a target of ridicule.

The government has embarked on its commercialisation as a cash crop, a hedge against household hunger.

In the last 10 years, climate change has negatively affected the production of Zambia’s other staple food, maize, and threatened the country’s food security.

Cassava is now being grown on a commercial scale.

Production is being rolled out to traditionally maize producing Southern, Eastern and Central provinces as insurance against drought.

The tuber crop was introduced in Zambia from native South America by the Portuguese in the 16th Century.

It has since been growing well in some parts of the country as a good source of high-carbohydrate food.

According to the African Development Bank (AfDB), farmers had been using low-quality planting materials and suffered from poor harvests, leading to hunger and poverty across many villages.

Yet cassava is the effective protection against hunger induced by poor maze yields.

According to the Food and Agriculture Organisation (FAO), today maize supplies about 60 per cent of national calorie consumption and serves as the principal staple food in central, southern and eastern Zambia.

‘Cassava furnishes a further 15 per cent of total calories and constitutes the mainstay of diets in northern and western Zambia,’ FAO reports.

Working with its partners, the Government has been promoting the growth of the tuber both for food security and commercial purposes.

Cassava is also receiving new attention because it is a source of ethanol, glue, animal feed and industrial starch whose demand is growing in the agriculture and manufacturing sectors.

The government has identified cassava as an alternative to maize in the face of climate change-induced hunger that has dogged some parts of Zambia in the last few years.

Working with partners, the Government has introduced a number of programmes aimed at promoting cassava in drought-prone regions.

The crop has now started attracting investments from the business community.

Zambian Breweries Plc in Ndola, Sunbird Bioenergy Africa in Kawambwa in Luapula Province, and Zhongkai International, a Chinese company in Central Province, are some of the commercial players in the sub-sector.

According to Beijing Review, a Chinese English weekly newspaper, Zhongkai International uses about 200 tonnes of dried cassava at its plant.

Company Chief Executive Officer Chen Guiping told Beijing Review that from just one lima (0.49 hectare) of land, a farmer can easily raise about K5,000 (US$231) cash, which can go a long way in supporting their livelihood.

“Before setting up the factory, we visited all African countries and found that the produce in Zambia had the highest starch percentage. So, we established the factory in this country,” Mr Chen said.

He said cassava from Mansa in Zambia’s Luapula Province has 75 per cent starch and is among the highest quality varieties in the world.

With support from the AfDB, the Zambian Government has been implementing a cassava seed bulking programme.

The initiative is aimed at producing input for the roll-out of production in the northern half of Zambia, and its introduction in the east and south where cassava is a new but necessary crop.

The biggest challenge to the roll-out has been inadequate seed material.

But the AfDB reports that through its Technologies for African Agricultural Transformation in the Savannahs (TAAT-S) flagship initiative, it has provided Zambian farmers with a solution known as “seed bulking”.

The AfDB initiative is implemented by the International Institute of Tropical Agriculture (IITA).

The programme involves collecting seeds from a target crop and then growing them in a controlled setting.

Using this method, farmers can multiply their seed bank, making them more secure and able to scale up production.

‘In 2019, IITA worked with agriculture specialists from the Zambian government and local partners to set up 58 cassava seed-bulking farms, with smallholder farmers managing the local outfits,’ reports the AfDB.

‘Operating under the TAAT-S initiative, each seed-bulking farm covered two or three types of high-yielding cassava seeds, to increase productivity to 20-30 tonnes per hectare, from a baseline of below 10 tonnes previously,’ the AfDB report says.

High yielding and drought-resistant varieties, Bangweulu and Mweru, have been developed in the north and are being rolled out.

Findings of a study commissioned by FAO show that cassava is the answer to the hunger that has stalked the maize-dependent southern half of Zambia, which is dogged by droughts.

In a report titled ‘Cassava as drought insurance: Food security implications of cassava trials in Central Zambia’, the FAO says results of the research suggest that current enthusiasm for expanding cassava production outside of northern Zambia is well-founded.

It explains that wide, weather-induced fluctuations in maize production lead to recurrent food shortages in Zambia’s maize consuming regions, while the cassava-growing regions of the north enjoy stable food production, even in drought years.

FAO says, unlike most other crops, cassava offers farmers considerable flexibility since they can plant it over many months and harvest throughout the year.In contrast, annual rain-fed crops such as maize and cotton lose one per cent to two per cent of their potential yield for each day farmers plant them after the first planting rains (Ellwell, 1995; Howard, 1994).

The Seventh National Development Plan (7NDP) identifies cassava as one of the crops to be promoted in the economic diversification and industrialisation agendas.

In the 2021-2026 manifesto the Patriotic Front (PF), Government has committed to upscaling diversification from maize to other crops including cassava.