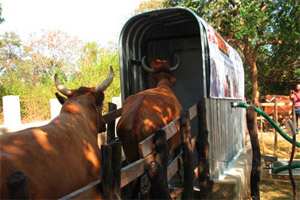 The six spray races are as a result of a partnership between NWK Agri-services and Musika Development Initiatives Zambia, through a US$90,000 -pilot project.

NWK Agri-services chief agriculture services officer Kelvin Hambwezya said the pilot project  was designed with the aim of  addressing the many challenges farmers are faced with in Mumbwa, thereby increasing  the well being of  livestock farming.

“We have set up six spray races at a cost of US$90,000. The success of this project will see opportunities increase the coverage of these facilities geographically thereby, potentially servicing farmers nation wide,” Mr Hambwezya said.

Speaking at the same function, Fisheries and Livestock Minister Greyford Monde said the spray races would help the farmers in the area to reduce animal diseases and increase food security.

Mr Monde said government was in the process of developing a livestock policy outlining the vision and the roles that various stakeholders would play in order to contribute to increased production of the livestock sub-sector.

Senior Chief Shakumbila said that there had been significant challenges in the up-keep of the general health of animals due to lack of knowledge and access to vaccines.

He said the implementation of the pilot project was projected to see enhancement in the health of cattle herds in the district.

SADC on the lookout as Brown locusts hit Southern Namibia

Zambia, Namibia, Angola on the look-out as deadly FMD variant is identified in the Zambezi Region

Zamgoat and its rise to prominence