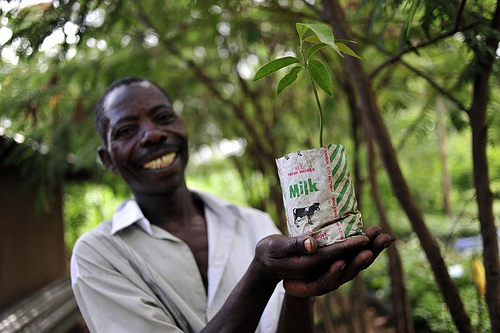 In conventional agriculture, the practice is to plough the land and loosen the soil before planting. But agricultural experts are warning against this method, saying that it is not sustainable for the world’s burgeoning population — which the United Nations projects will reach 8.5 billion people by 2030, from 7.3 billion currently — as it is putting a strain on land resources.

According to experts, when the plough turns the soil, it alters its structure, causing the particles to become loose and weak, and this affects yields. The situation is worsened by the effects of climate change.

In fact, periods of fallow — which were necessary to allow the soil to regenerate itself before a new crop was planted — have become non-existent, meaning yields are dropping rapidly.

Rudo Makunike, a sustainable land management expert at the New Partnership for Africa’s Development, (Nepad) said: “It is not only an adaptation mechanism for climate change, but it also helps to build resilience in farming systems.”

According to the United Nations Food and Agriculture Organisation, conservation agriculture reduces the farming systems’ greenhouse gas emissions and enhances its role as carbon sinks.

This is important for Africa, which according to the UN Framework Convention on Climate Change, is the most vulnerable to the effects of climate change, but the least resilient.

The impact of climate change affects all sectors of the economy — including water, energy, infrastructure, agriculture and food security, as well as tourism. The knock-on effect is lingering poverty on a continent that lags behind in meeting the UN Millennium Development Goals.

The worrying bit is that, while the land under conservation agriculture across the globe is increasing, that in sub-Saharan Africa remains a small fraction of the total.

One of the CA practises that is quickly becoming popular is zero tillage, which, according to Nepad has expanded by six million hectares across the globe in the past 10 years.

Ms Makunike said that more than 80 per cent of that land is in the Americas. “In sub-Saharan Africa, it is a mere 0.3 per cent,” she said.

Zero tillage helps to reduce soil erosion, because very little of the soil is loosened. This then speeds up the rate of soil growth, at one millimetre per year, due to the accumulation of organic matter.

Zambia has the second largest area in sub-Saharan Africa under CA after South Africa, with over 200,000 hectares. With an increasing number of Zambian farmers practising CA, agricultural yields have grown by double digits to propel the country to food security.